Last week Federal Reserve chair Janet Yellen spoke before Congress and gave no indication of a near-term increase in interest rates, as many believed she would. Yellen highlighted headwinds to raising US interest rates including:

The unemployment rate in the US, while improving over the last five years, is little changed since last October at 5.5 percent. See the chart below. 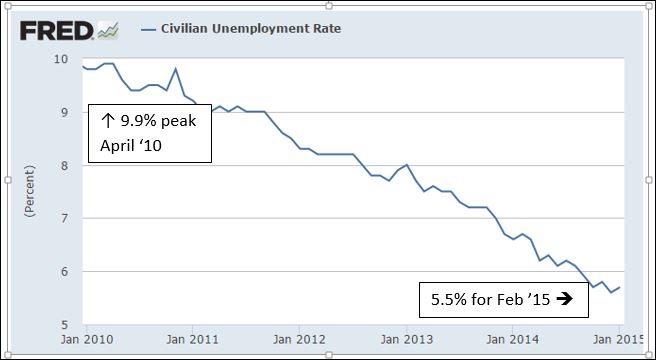 The Federal Reserve, however, focuses on a wider measurement of unemployment. The Fed includes an additional 9 million people who currently are:

In Yellen’s view the wider ranks of unemployed could worsen if interest rates rose and cut off economic growth. Recent high-profile headcount reductions in the energy industry and other select companies (i.e., Target Corp.) underscore her concerns. 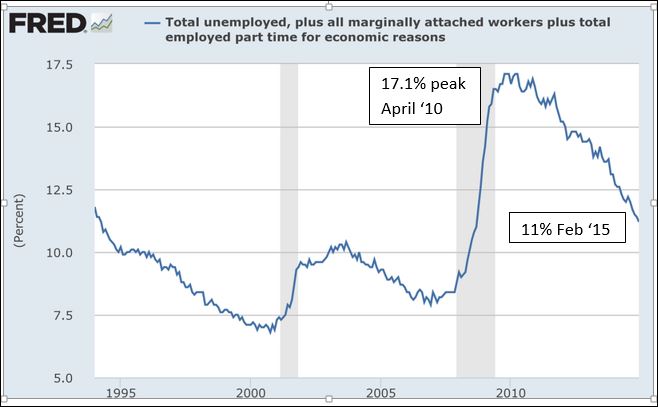 Source: Federal Reserve Bank of St. Louis and US Bureau of Labor Statistics

US GDP growth was 2 percent last quarter on a “real basis” or adjusted for inflation. While low, the US was far better than the slowing growth rates in Europe and Japan. China has also been slowing from its prior 8 percent growth rate. Therefore the rest of the world, which has become more dependent on our growth over the last two years, would be harmed if interest rates rose and slowed the US economy.

Additionally, the US dollar strengthened against foreign currencies, especially since mid-January, to 12-year highs this week. US products have become more expensive and thus less competitive to the rest of the world, a potential headwind to those US companies who are selling overseas. This could also become a headwind to US job hopefuls.

Core price inflation is currently at 1.3 percent when excluding energy and food as shown below. Recent readings are much lower when you include energy prices because of their dramatic decline since last summer. However, I believe the Federal Reserve is focusing on the core rate. This still leaves the Fed waiting for significant improvement toward their 2 percent target rate before raising interest rates.

Source: US Bureau of Economic Analysis

SUMMARY: Taken together, the three key data drivers for the Federal Reserve to raise interest rates and constrict growth in our economy are not sending clear signals yet. Until a clear trend has been established and the Fed has confidence in its outlook, we believe interest rates will continue in a narrow band.

Dow Jones US Moderately Conservative Index is up 1.01% (TR) for the year

To expand on these market reflections or discuss other portfolio strategies please don’t hesitate to reach out to the Gradient Investment team.