Don’t Fight The Fed (or the ECB or the BoJ)!

“Don’t fight the Fed!” is a phrase we’ve heard repeatedly over the decades. But what exactly does that mean, and can we use some variation of it now to make money?

“The Fed” is the U.S. Federal Reserve Bank, an independent arm of the U.S. government, which controls money supply and velocity of money. That’s a mouthful! In practice it is responsible for a safe, flexible and stable monetary system here in the U.S. Voting members of its board of governors determine the key lending rate between banks and open market bond trades. These actions dictate other interest rates, from bank savings accounts to certificates of deposit (CDs) to long-term corporate bonds.

When the Fed finds our economy struggling, as it did back in 2008, it can lower interest rates or loosen the money supply in an effort to stimulate growth in our economy. The Fed actually did this via a series of actions over the ensuing year, now referred to as quantitative easing or QE. Conversely, as the Fed detects that our economy is starting to over-heat and inflation is speeding up, the Fed will tighten to slow down economic growth.

As the Fed “loosened” over the past few years, sending the message that it wants more growth, the effects were many: 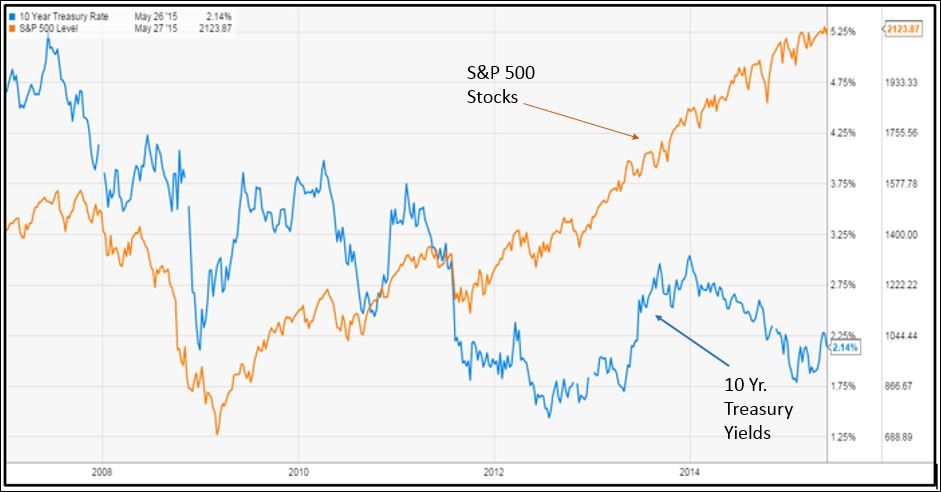 From an 8.2% decline in our economy in the fourth quarter of 2008, Fed actions resulted in 4% economic growth a year later, then to an average 2.5-3.0% quarterly growth rate since.

As a result, the ECB announced a series of moves to stimulate the European Union economy via quantitative easing. It will pump $65 billion per month into their markets by buying bonds for the next several months, driving down interest rates over time. The severity of their economic condition caused their currency, the euro, to fall by 25% versus the U.S. dollar between June 2014 and February 2015.

The central Bank of Japan (BoJ) is in a similar predicament to that of the European Union. In this case, the International Monetary Fund (IMF) actually called on the BoJ to expand its monetary easing to invigorate the Japanese economy and avoid deflation. The IMF took this unusual action since the BoJ’s efforts to date have been inadequate to fuel economic growth. Augmenting the typical central bank efforts, the government of Japan’s employee pension fund (the largest in the world) is also committed to doubling its stock positions to 25% of total values.

Central banks at another 20 countries including China, India and Australia have recently started to stimulate their economies via monetary easing.

We expect the results of such easing in international markets to be similar to those of the U.S.:

While the results may not be as dramatic as those of the US, we do believe investors should not fight the international central banks (“the Feds”). With lower interest rates and economic growth come increased stock prices.

We still believe certain portions of the US markets can continue to grow. However, we believe international stock markets are poised for better gains than the overall US stock markets as their central bank easing actions begin to take hold and our Fed begins to gradually tighten.

A great way to gain access to potential growth in the international markets is with our actively-managed Gradient Endowment Series D or E which buy exchange traded funds in select overseas markets. Another option is the Gradient Tactical Rotation strategy which will allocate funds to international markets when stock price momentum indicators dictate.

To expand on these market reflections or discuss other portfolio strategies please don’t hesitate to reach out to us at 775-674-2222.