The June 2015 Federal Reserve Open Market Committee (FOMC) meeting was highly anticipated. This meeting was earmarked six to nine months ago as the meeting where the Fed would likely end their six-year zero interest rate policy and raise the fed funds rate. Well, the meeting is over and the Fed still has not raised rates. Now the debate will focus on if the September or December FOMC meetings will be when they finally raise rates.

What did the Fed say and what does it mean for interest rates and the bond market? The Fed said:

This scenario of moderate growth and low inflation is positive for both stocks and bonds. The bond market has been bracing for the Fed to increase the fed funds rates by 25 basis points for at least six months, and it may take another six months for them to act. The Fed is clear that their future actions will be data dependent (specifically in relation to the employment and inflation figures). The Fed wants economic strength to support a rate hike so they can exit their zero interest rate policy (ZIRP) and normalize interest rates.

While the financial media is hyping Armageddon in the bond market, we’re not ready to throw in the towel on bonds just yet. The Fed will likely institute a symbolic 25 basis points rate hike prior to year end, but it will not change the fundamentals affecting bonds. Slow growth with low inflation is not a recipe for runaway interest rates. Moreover, the following metrics should keep interest rates low for an extended period of time: 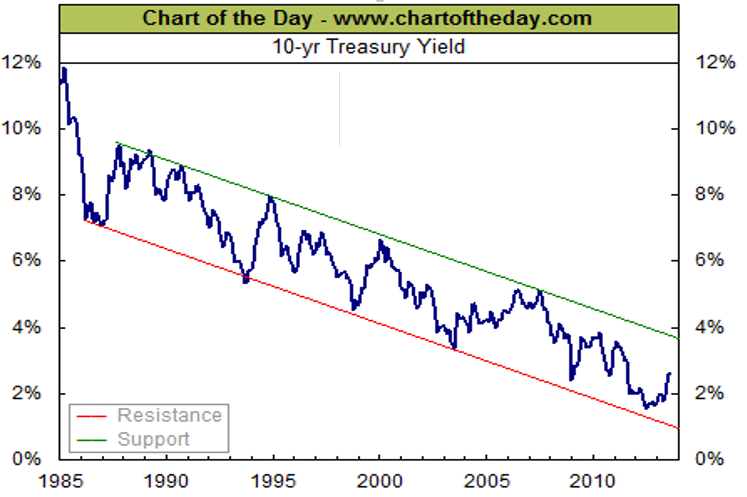 Until interest rates on the 10-year Treasury bond break above its downward trending channel, we’re not worried about major losses in the bond market. Going forward however, we do need to temper our return expectations in bonds. Bond prices rise as interest rates fall; so as rates have moved from 8% to 6% to 4% to 2% there is little room left for capital appreciation. Expectations for future bond returns need to be tied closely to the interest earned (coupons). Expect 2-3% returns from bonds moving forward, not the 5-6% from days gone by.

Through June 15 of this year, returns from the various sectors of the bond market have been relatively flat despite the recent increase in interest rates. 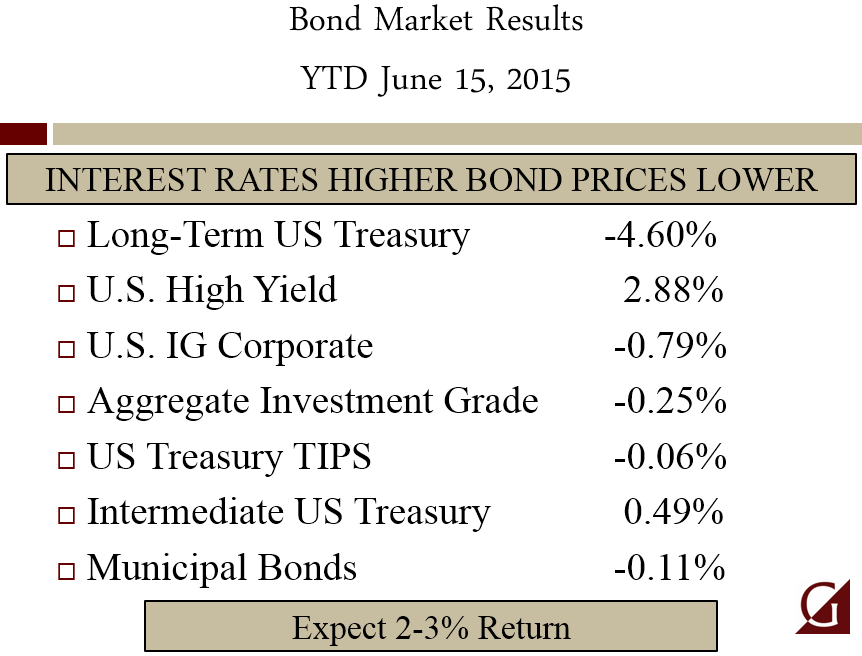 Bonds still have a place in one’s portfolio, but they need to have a clear purpose/objective behind them such as:

The key to owning bonds is to combine the appropriate return expectations with a proper fixed income allocation that matches your investment objectives.

To expand on these market reflections or discuss other portfolio strategies please don’t hesitate to reach out to us at 775-674-2222.