Consensus earnings for the S&P 500 are expected to decline 3% for the quarter ended June, the largest decline since the third quarter of 2009 when earnings were down 16%.

Earnings at energy-related companies are being socked by the 54% plunge in oil prices since their peak in July of last year. With the oil price drop, U.S. oil drilling has been cut back dramatically as seen in the rig and production chart below.

Oil production cannot be turned off like a faucet. Despite lower prices US production is still on the upswing, and inventories are near their 80-year seasonal peak. However, expectations are for volume declines beginning in the coming months, and oil prices are expected to remain around current levels or improve modestly, having already reach their lows in February. See the oil price chart below. 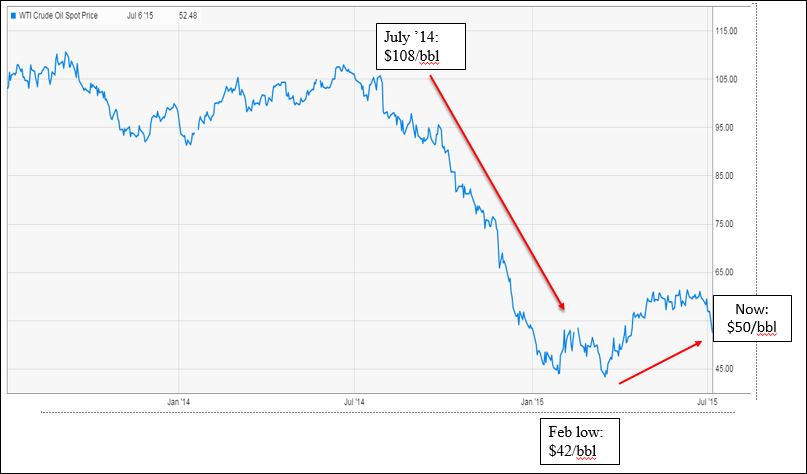 With major cost reductions in place and the steep drop in oil prices behind us, we anticipate that upcoming oil production drops would produce a tailwind to energy companies’ earnings over the coming quarters.

US-based global companies are being impacted by the strength of the US dollar versus foreign currencies over the past year. See chart below, noting the decline of the value of the Euro.

As US-based companies sell their products overseas, sales are impacted by the strength of our dollar. Locally sourced products & services appear more attractively priced to customers abroad when our dollar has increased in value. Most companies hedge their earnings, so the impact to earnings is not as severe as the sales impact, but both the sales and earnings growth trends can certainly be interrupted by these macro-economic conditions. The following example may clarify this.

The end result of such a scenario is that General Electric would record a 25 million year-over-year decline in US dollar sales.

The majority of this unprecedented broad-based currency re-valuation occurred in the second half of 2014. While further strengthening of the dollar is not out of the question, we expect overseas currencies to begin to show improvement, year-over-year, in the second half of 2016. This is due to efforts by overseas central banks to stimulate their economies. Imitating the success of the US Federal Reserve, the central banks of 22 other countries are currently in an easing mode. We expect them to show varying amounts of success based on factors specific to each country. In general, however, we anticipate that the US dollar will most likely stabilize, providing a tailwind to earnings for US multinational companies.

With these headwinds turning into tailwinds, consensus earnings estimates for the S&P 500 in the coming quarters are on the rise, from down 3% in the June ’15 quarter to down 1% in the September quarter to up 12-13% beginning in mid-2016. See chart below. 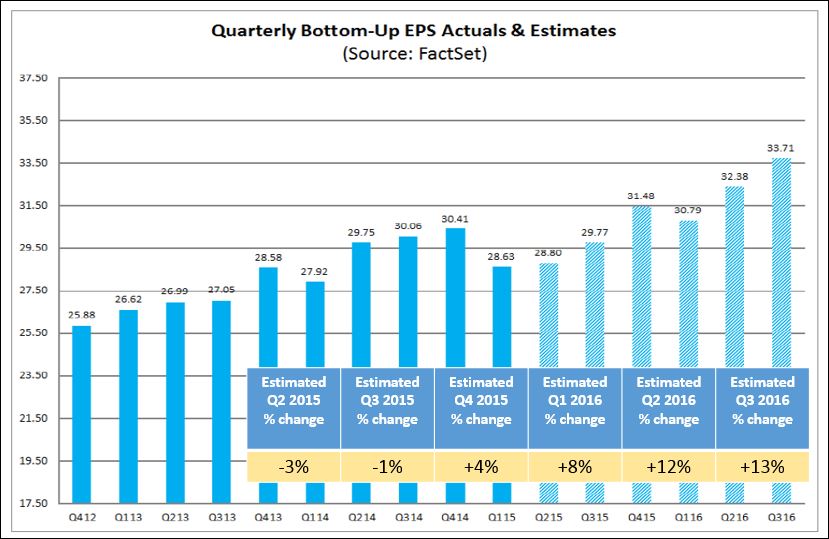 Current valuation for the S&P 500 stocks as measured by price/earnings is fair in our view. At 16.5 times forward earnings, they are above their 10-year average and toward the top end of the range, but nowhere near the peaks reached during the internet bubble of 2001-2002. We could get some multiple expansion as earnings growth accelerates. However, we would be more positive on any pullback in the market.