In a much anticipated announcement the Federal Reserve decided to keep the Fed Funds rate at the zero to 0.25 percent range. This is the seventh year the rate has been in this exact range, since it was cut in the throes of the recession in December, 2008.

Recall that the Fed has two mandates: controlling inflation and maximum, sustainable employment. So why did the Fed choose to maintain record low rates? The three main reasons were:

1. Very low inflation in the US Normally Fed rate hikes occur when inflation is on an upward trajectory. Inflation (ex-food and energy) for August was 1.8%, below its 2.0% target.

2. US jobs While the unemployment rate has come down to 5.1% from its 10% peak in ’09, those participating in the labor force are declining as a percentage of the total. This has been on the decline for seven years now.

3. A fragile global economy There were several mentions of China in the follow up commentary, and slowing global growth overall. Any US rate hike would likely divert investments from overseas markets. It would also further strengthen the US dollar, which in turn would further cut into sales of US products to overseas markets, impacting US multinational companies.

The decision was not unanimous, however. The dot plot shown below indicates each Fed member’s rate expectations. Of the 17 voting members, 13 selected a higher interest rate range by the end of this year. The plot also shows that Fed members project rates will be even higher in the coming years, to the 3.5% area at the end of 2018 and longer term. 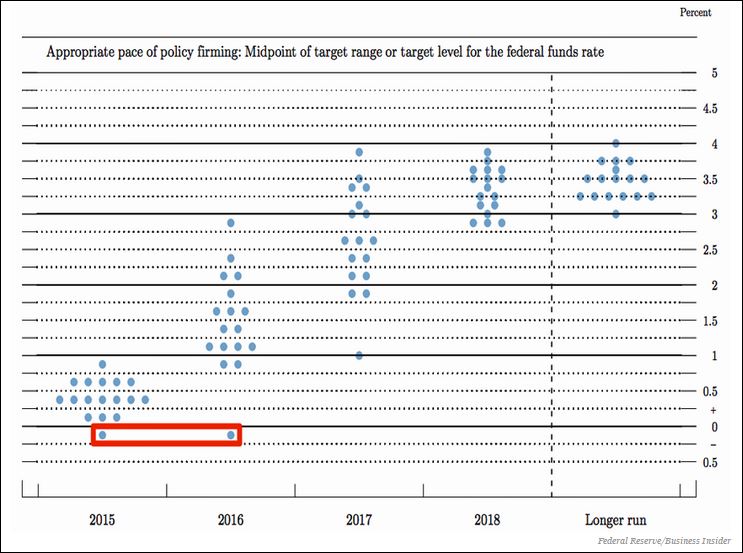 Does this mean that the Federal Reserve is currently taking a hands-off policy on the US economy?

We don’t think so. What most people don’t realize is that the Fed is equipped with other tools besides changes to the Fed Funds rate when it seeks to heat up or slow down our economy. Some of these tools are:

Oftentimes, as shown in the graph below, the Fed encourages early market moves in interest rates since their decisions are based on data that is generally accessible. In the yellow boxes we can see that market interest rates (the blue line) move before the Fed changes the actual Fed Funds rate (the red line).

We may see a drop in the “overnight” lending rate in the coming weeks in an effort to stimulate US economic expansion. Back in 2007, the Fed expanded this service to as much as 30 days. We will be watching closely for changes to the program, since there are usually no announcements.

We believe a rate hike to the 0.25 to 0.50 percent range over the next six months (perhaps as early as next month) is being telegraphed by ongoing Fed governor commentary. When they do raise rates, we believe it will be interpreted as positive for the stock markets as it will indicate that the US economy and corporate profits are on more solid ground within a larger, global scope. Additionally, we believe that further rate hikes will be gradual (lower and slower). This was part of Fed Chair Yellen’s presentation to Congress last spring, that a more gradual path was a prudent approach.

So long as we do not have runaway economic growth and roaring cost inflation, which we do not expect, we believe a normal 10-year Treasury bond range of 2 to 4 percent is likely for the next several years.

Dow Jones US Moderately Conservative Index is down 1.97% (TR) for the year

U.S. 10-year Treasury Futures are yielding 2.13% down 4 basis points for the year