Ringo Starr’s first big post Beatles hit was titled, “It Don’t Come Easy”. While Ringo was singing about love and relationships, he might as well been singing to investors dealing with volatile markets. Lines like, “Forget about the past and all your sorrows” or “Got to pay your dues if you wanna sing the blues”, or “I don’t ask for much, I only want your trust” are solid tips for these topsy-turvy markets.

In unusual fashion, the October stock market was as good as September was bad. In October, all ten sectors in the S&P 500 showed positive results and the major indexes had their best monthly returns in four years. The leaders this month were the downtrodden energy and material sectors while financials lagged. Major stock markets around the world generated high single digit returns for the month. The October rally now gives the U.S. stock market a fair chance to post a record setting seventh consecutive year of positive returns. In the rear view mirror it all looks easy, but the string of short-term market corrections along the way continue to throw nervous investors to the sidelines. 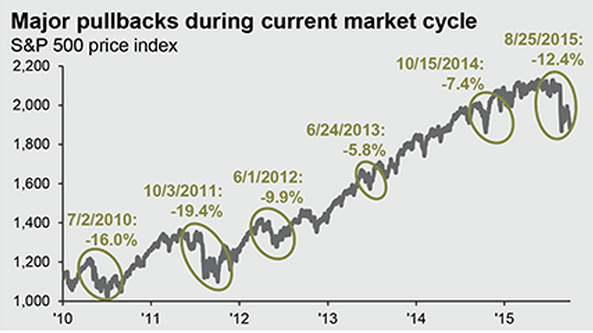 The economic backdrop has not changed significantly from September to October, rather the market’s perception of facts and expectations has repriced the market. The facts remain:

– The U.S. and global economies are in a slow growth mode.
– Central banks around the world are trying to help their economies prosper and grow via easy monetary policies and weak currencies.
– Interest rates are low.
– Third quarter corporate earnings are weak as advertised.
– Inflation is low and deflation is still a concern.
– Oil prices have temporarily stabilized in the mid $40 a barrel range.

While there will be plenty to worry about in the upcoming months, we are cautiously optimistic heading into 2016. Year over year comparisons will soon reflect the past impact of extended lower oil prices and a strong dollar; thus creating manageable hurdles to clear in the near future.

Statements from the U.S. Federal Reserve lead me to believe they will continue their accommodative monetary policies, although a token 25 basis point rate hike should be expected in December or early 2016. This may well be a “one and done” move until more economic data is known later in 2016. U.S. Treasury interest rates have been stable over the past year as depicted in the chart below. 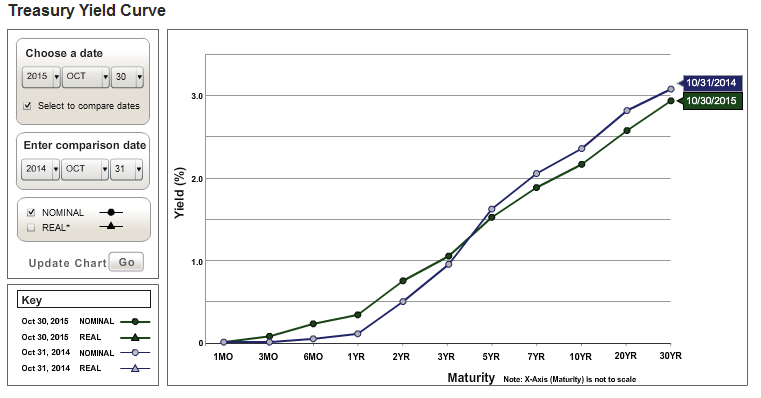 Expect tight bond trading ranges in the months ahead. A yield on the ten-year Treasury visiting 2.00 percent when stock market worries run high and a 2.50 percent yield when stock markets are strong provides a reasonable trading range in this slow growth world. At the end of the day, expect bonds to deliver low single digit returns into the foreseeable future. Note the emphasis is on “low”.

Volatile markets always test investor resolve. It’s never a straight line up no matter how much we want it to be. Ringo had it right, “you know it don’t come easy”.