The market sold off in the first few weeks of January, spooked by the new year’s hit to the normally volatile Chinese stock market and compounded by anxiety over the quarterly earnings reports and outlooks. Early in the month fears affected nearly every sector: technology, energy, financials, industrial, and health care. During the first three weeks, the S&P sold off 7%, for the worst start to the new year on record.

While it’s still early in the year, we expect to see estimates increase again in the coming weeks and months.

Meanwhile the Chinese economy continues to grow at a rate of nearly 7%.** This growth has been in a gradual decline and reflects a change in government direction from an industrial-oriented economy toward a consumer service-driven economy. This is a slowdown from over the 9% growth rate of a few years ago. However, the growth rate reported in January for the prior quarter was still within most economists’ expected range, and does not warrant additional concerns at this juncture. As we’ve pointed out in the past, China represents just 2% of our total exports.

Given the market correction both here and abroad, however, it certainly presents many opportunities. Specifically, we believe the stocks of large cap, multinational companies with strong balance sheets that offer good dividend yields and have the capacity to continue to grow dividends at a rate faster than inflation have been hard hit in January and offer tremendous value currently. These are the types of stocks that we own in the Gradient 50 portfolio.

Looking at US stock valuations, they were pushed down from 16.1 times forward twelve months earnings at the end of December to just 15.2 times currently. This compares to 17.2 times last February. See the chart below. 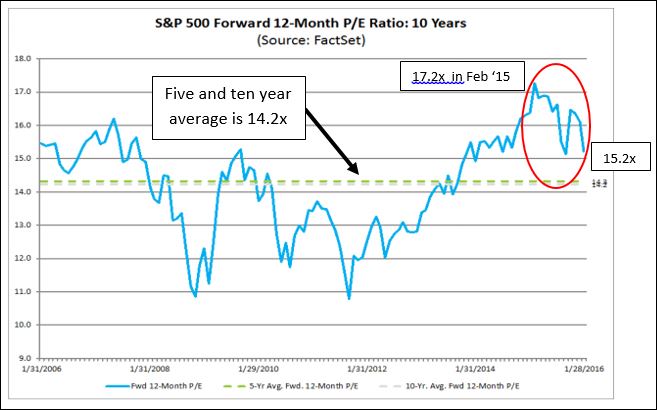 We believe this new, lower valuation is very attractive for new money coming into the market, particularly given modest estimates for earnings growth of just 5% in 2016. 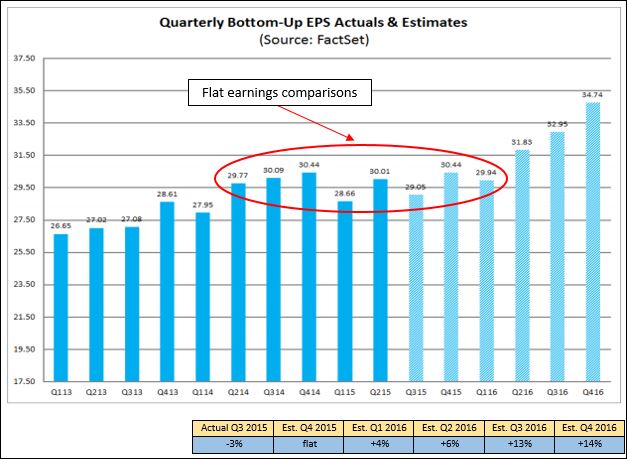 Earnings estimates for the coming year reflect a widespread view that the headwinds to earnings growth in 2015 (namely falling oil prices and the strength in the US dollar) will fade and become tailwinds to growth in 2016. With our outlook for an accelerating rate of growth in the coming quarters, we believe current valuations have overly discounted this scenario.

Companies in the Gradient 50 portfolio, with their exposure to international sales and energy, should benefit from these tailwinds. With large capitalization stock prices down 6% on average for the month of January, we believe now is an opportune time to add to your holdings for dividend income and potential capital gains.