Household debt (mortgages, auto loans, credit card debt, etc.) is near its 2008 peak. That’s a headline sure to make many people pause.

Digging into the numbers, one can find that growth in jobs, household income and declining interest rates means that consumers are now in a far more robust situation to pay down that debt. Add in lower cost of energy (both for heating/cooling and weekly gas purchases), and you have even more disposable income. Therefore delinquencies as a portion of total loans are low and stable, which should give investors a sense of relief.

Some will acknowledge that sub-prime lending (loans to those with less than a 600 credit score) for home mortgages has been dialed down post the recession. But they will argue that sub-prime lending for auto purchases are dialed up. Here also, the positive news on higher incomes and lower interest rates apply. While the absolute level of auto loans is higher than the peak in 2006, the portion of disposable income that they represent is well below that of 2006.

Meanwhile home prices, which expanded to bubble proportions in ’08, are rising at a more modest rate in recent months. Sales (and new mortgages) are being restrained by a lack of inventory, both for new homes and existing homes, which is neutral to our economic growth.

As consumer spending accounts for about 70% of total gross domestic product (GDP), the consumers’ heightened ability to pay down debt is a tailwind for our total economic growth.

What about borrowings in the US overall? The debt to GDP ratio remains high if you look at the last 60 years (see chart below). However, the highest levels were due to increased government debt in the wake of the recession, and they have been coming down in each of the last five years. We view current conditions to be healthy for further declines in the rate and positive for U.S. economic growth. 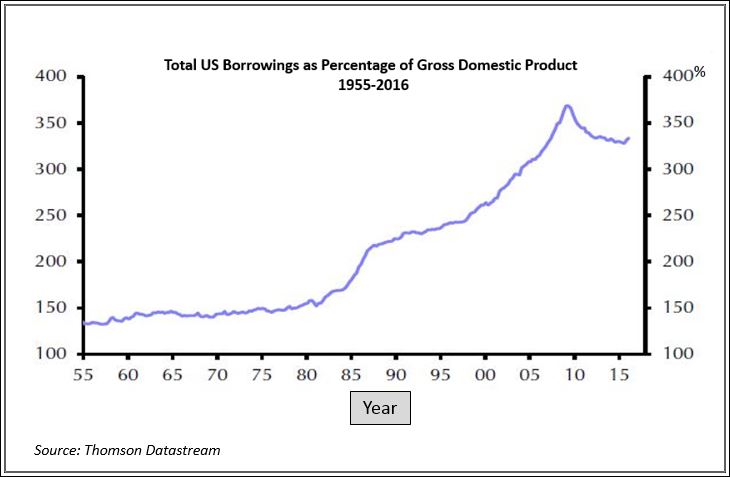