To Raise or Not To Raise Rates? WHEN, not IF is the Question

It’s been nearly a year since the Federal Reserve raised interest rates, by a modest 25 basis points to the 0.25-0.50% range. Since the day of the raise, there have been many stories in the financial press, with some investors running around crying, “Rates are rising! Rates are rising!” Meanwhile we have been correctly sticking with our “lower for longer” mantra all year. From 2.27% yields on 10-year US government bonds at the beginning of this year, yields actually fell to 1.37% in early July. See chart below. 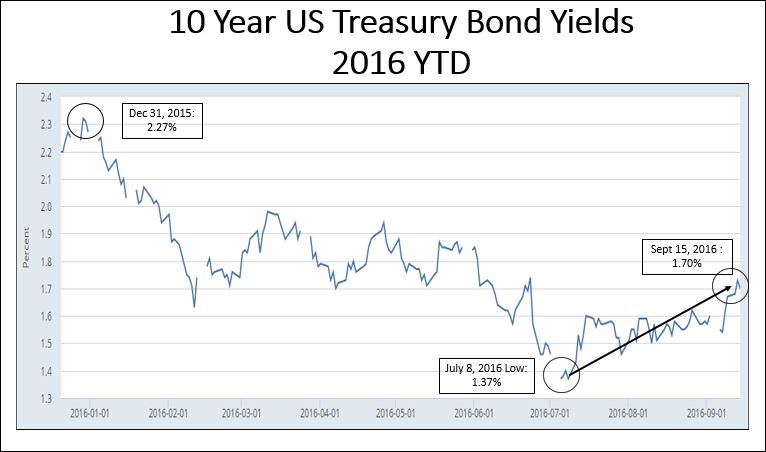 As we analyze the data, we have seen our economy pick up very gradually this year. Why? Energy pricing tailwinds have dissipated, the dollar has flattened out and exports have improved. Real GDP rose just 1.1% in the second quarter of 2016, and the deficit dropped by 12% in July. Economic growth over the balance of the year is likely to remain modest, below the 2% mark.

We have seen unemployment drop to the 4.9% level, but have not seen consistent employment and wage growth rates. On the inflation front, the core rate remains below the Fed’s 2% target. None of this points to the usual reasons for a rate hike: curbing growth that is de-stabilizing our economy or curbing runaway inflation.

The last time the Fed met in June was just days after the markets were unsettled by the British voters’ decision to leave the European Economic Union, or Brexit. In prior statements the Fed noted their discomfort with overseas economies as a reason to put off rate hikes, and Brexit was mentioned as one of the reasons for their restraint in June.

With nearly 100 days left to the year, a lot could still happen. But with the Federal Reserve meeting in just a few days (September 20-21), we would be very surprised if they were to raise rates based on the US data.

However, bond yields have been rising in recent days on improving global growth metrics. We believe the Fed will eventually follow, although not this month. We’ll know for sure very soon.

Are higher interest rates necessarily negative for stock prices? Actually, we believe this improvement in global economies should be positive for stocks since rising economies lead to rising corporate earnings and would make current valuations appear attractive. The threat of higher interest rates has been pressuring S&P 500 in recent weeks, and in doing so we believe it has created an opportunity to add to stock portfolios in select sectors.