Stock, bond and oil market values have turned up in the last couple of weeks.

The Federal Reserve announced last Wednesday that it will keep interest rates flat for a while longer, in line with our expectations. The last time the Fed raised rates was at its December 2015 meeting and then just to the 0.25-0.50% range. Headline inflation is up just 1.1% year over year as of August, but appears to be moving toward the Fed’s 2% goal. Unemployment remains at 4.9%, half the rate we endured in the last recession. However, economic growth in the second quarter was disappointing, rising just 1.1% year over year.

Now, however, real GDP growth is expected to accelerate in the current quarter to the 2.5 – 3.5% range. Some of this is attributable to increased farm exports, but other exports and domestic retail sales are also showing signs of improvement. With that comes a more positive outlook for business spending. Inflation remains low, so the inevitable Fed rate hike (in November or December) is likely to be modest, perhaps another 25-50 basis points, in our opinion.

Oil prices have been at the mercy of OPEC production for some time now. With the income of oil producing countries slashed over the last two years on sharply lower oil prices, there has been much speculation that those countries would cut production in an effort to raise oil prices. All indications are that the OPEC members agreed this week (prior to their official meeting in November) to cut production by as much as 20% of current estimated output. This drove oil prices 7% higher in the first 24 hours, and energy stocks rallied. 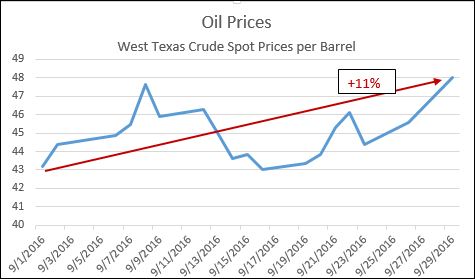 Apart from the oil sector, we believe third quarter earnings are likely to beat recently lowered expectations. Based on rising U.S. consumer confidence to the highest level in nine years, we expect to see higher consumer spending on domestic goods and services which are the key drivers of the US economy. Exports are rising as the headwinds of a strong U.S. dollar last year have become tailwinds this year, allowing a more level playing field for U.S. manufacturers to sell products overseas with rising sales and profitability.

We believe the stock market could pull back given the rhetoric surrounding the final weeks of what appears to be a close presidential race. We would view such a pullback as as opportunity to add to positions for 2017. Looking out over the next year, we see consensus expectations of low double-digit earnings per share growth. With similar valuations as today’s forward P/E of 17x, that EPS growth is likely to lead to low double-digit gains for the S&P 500.