Rising Interest Rates – What Do We Do?

Since the election, interest rates have climbed both here and abroad.

Actually, the rise began overseas prior to the election. Negative interest rates offered on the bonds of some foreign governments have not stimulated economic growth as hoped. Then came the U.S. elections and expectations for increased inflation are driving up yields on both U.S. government and corporate bonds. This is prior to any changes by the Federal Reserve.

After years of low inflation and fears of deflation in the U.S., the reversal in outlooks has been quick and substantial. Trump’s campaign promises centered around increased government spending for infrastructure projects with its inherent upside pressure on prices of materials and wages. The newly-elected president has also promised to reduce tax rates, including the repatriation of corporate cash from overseas at a modest 10% tax rate.

This plan would increase government spending and lower government tax revenues. Budget deficits and the absolute level of public debt would likely rise, but we don’t know to what extent. Remember it is still a plan, and election promises are easier said than done. Both the U.S. House of Representatives and the Senate will have to debate the merits, create a compromise resolution, and put it to votes before the president could grant approval of his vision. Even though some believe that a Republican-dominated Congress will ensure quick and decisive action, we must recall that the campaigns proved that not all Republicans view progress in the same way. The point is we are likely moving away from a US economy assisted by monetary (Federal Reserve) policy toward an economy facilitated by pro-growth fiscal (Congressional/Presidential) policy. 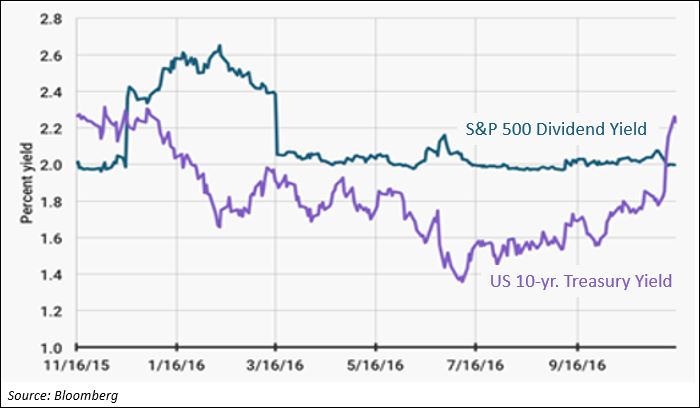 Does the crossover of rates indicate that investors should rotate from stocks to bonds? We don’t think so. We believe that stocks can continue to appreciate as corporate revenues and profits grow. There is likely to be an added boost to stock prices if corporations are given a tax holiday to repatriate cash from overseas and use it to buy back shares or declare special dividends.

Meanwhile, in a rising rate environment an investor who keeps bond holdings in short-term maturities has the opportunity to rotate into higher yielding bonds as holdings mature. Rates do not rise in a straight line, so opportunities should arise from time to time.

Remember that you’ve chosen a strategy that is right for your level of risk and return. Do not alter your strategy based on political events or short term swings in the markets. Keep your emotions away from your portfolio, stay patient and invest for the long haul.