What is happening with retail stocks?

On June 16, Amazon (AMZN) agreed to purchase Whole Foods (WFM) for $13.7B. The announced purchase has led to many questions regarding Amazon’s place in the grocery market and what it means for competitors. This transaction is simply the most recent example of a major disruption in the overall retail market, which has had a large effect on several stocks in the consumer sector. In today’s market reflection, we will examine what has occurred in the consumer landscape and the ramifications for investors.

In measuring total retail sales, the general trend has been relatively healthy. As seen in the chart below, retail sales have been steadily growing over the last 5 years, ranging between 1.5% to over 6% year over year growth. The data reflects that US consumers are still active and spending money.

The change that has occurred, and has had a massive effect on consumer stocks, is the transition of retail sales from physical stores to online. The below chart reflects online retail growth (red bar) compared to total retail growth (pink bar). Online retail is growing over 7x faster than total retail, and that number has accelerated over the last 3 years. 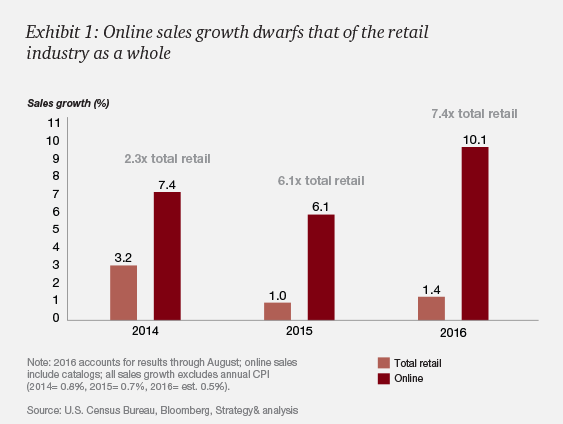 This trend has been most prevalent within nonstore (or online) retailers versus large scale department stores. Per the chart below, sales at US department stores have fallen for 23 straight months while nonstore retailers have continued to grow and gain share. 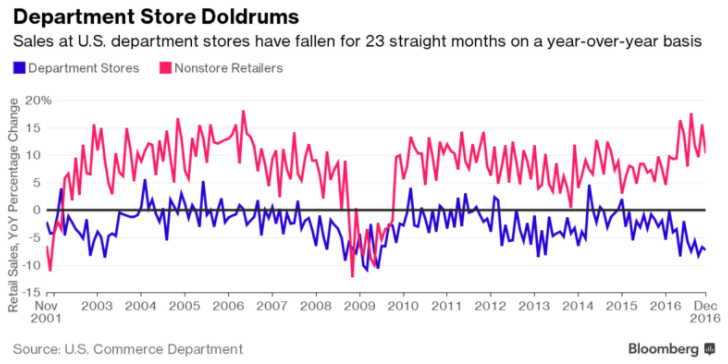 The effect of this share shift has been reflected in stock prices of retail providers. The below data reflects stock performance of several large retailers from 2014 to present. Not surprisingly, the ecommerce leader (Amazon) and home improvement retailers (Home Depot, Lowe’s) have been the best performers over the last 3 years. On the other side, physical based retailers in apparel and home goods (Kohl’s, JC Penney, Macy’s, Sears) have been the worst performers. 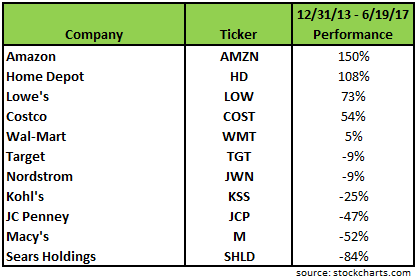 This share shift has not only had an impact on large scale retailers, but have included smaller mall-based retail as well. Companies like Gymboree, Payless ShoeSource, and Gander Mountain have all filed for bankruptcy this year, and have announced initiatives to close several hundred stores as part of their restructuring plans. These store closures have not only manifested itself in the share price of retail companies, but has had a negative effect on the real estate investment trusts (REITs) that lease mall space to these retailers. The data below reflects the underperformance of two largest mall based REIT providers (SPG and GGP) versus the broad REIT universe (VNQ).

For our portfolios, our asset selection in the retail space is centered on finding opportunity in the retail markets and avoiding, or selling, stocks that we believe will continue to suffer as a result of changes in the retail landscape. In that regard, we continue to hold companies like Simon Property Group (SPG) and Kohl’s (KSS), as we believe solid operating fundamentals and cash flow generation are not accurately reflected in current stock valuations. Conversely, we recently removed Target (TGT) from our portfolio due to our lack of conviction in their ability to turn around the weakening fundamentals of the company against stiffening competition.
As with any significant changes to market or industry dynamics, it is important to assess the risks of companies within the space to determine opportunity versus avoidance. At Nevada Retirement Planners, we believe that proper due diligence and active management allows us to take advantage of opportunities the market provides in the various portfolios we have available.