For now it seems like news flow from both the White House and North Korea has slowed. With that, what are the financial news networks going to be discussing in the coming weeks? One item that will start getting more attention as we exit summer and enter September is the “debt ceiling” of the US Federal Government

Let’s discuss this in more detail. The debt ceiling is the maximum amount of money the US can borrow. This legislation essentially puts a ceiling (limit) on the amount of bonds the US can issue to pay its obligations (bills) such as Social Security, Medicare, government salaries etc. If Congress fails to raise the debt limit the Federal Government could theoretically go into default, which could cause severe economic consequences and volatility in the financial markets. This has never happened before.

The current debt ceiling was suspended in November of 2015, but the suspension expired in March of 2017. The Treasury Department has been meeting its obligations since then by deploying “extraordinary measures”, which include legal and accounting maneuvers that allow the Treasury to temporarily finance current payments. Both Treasury Secretary Steve Mnuchin and the Congressional Budget Office agree that “extraordinary measures” will be exhausted by October of 2017. The chart below illustrates historical National Debt (red line) and Debt Limits (blue line): 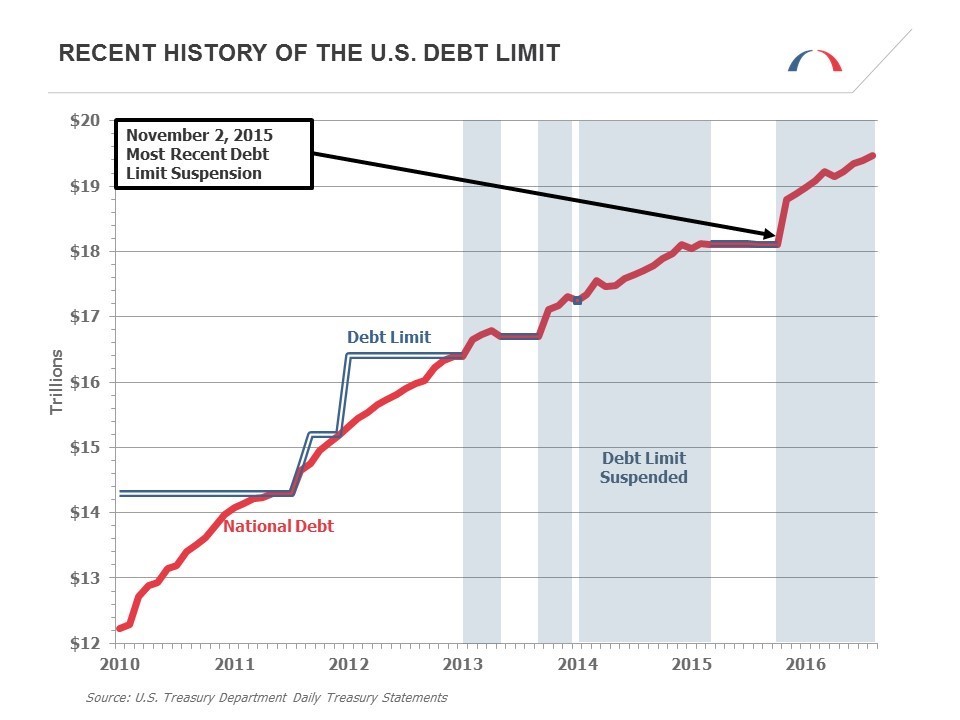 Congress has raised, extended, or suspended the debt ceiling 78 times since 1960. They need to raise the debt ceiling again to a level over $20 trillion, and soon. We fully expect them to do so, but there will be a certain amount of grandstanding by both parties as they try to use debt ceiling negotiations as leverage for their positions on other issues such as healthcare, tax legislation and budget spending reform.

U.S. Treasury Secretary Steven Mnuchin recently addressed the “urgent need for lawmakers to raise the debt limit promptly when they return from recess” during a speech in Kentucky. And Senate Majority Leader Mitch McConnell said “there is zero chance, no chance we won’t raise the debt ceiling”. A Congressional debt ceiling deal will raise US government borrowing limits in order to cover the annual deficit it accrues. It will also allow the government to continue paying its bills. Stay tuned as debt ceiling headlines ratchet higher when Congress returns from their August recess.