What is happening with REITs?

As we look on the year, we have seen several asset classes performing well. Bonds have shown positive performance and equity markets have been very strong. Alternative assets, like precious metals, have also had a strong year thus far. The chart below reflects the performance of several broad category ETFs on a year to date basis.

The above data also reflects the relatively disappointing performance in US Real Estate Investment Trusts, or REITs. Despite having more stock like risk and volatility, REIT returns have been closer to that of bonds than stocks. Based on the data below, we can see that long-term REIT returns are closely aligned to stock returns, and the underperformance has really been a function of the last year.

The information below reflects some of the reasons for the underperformance of REITs over the last year.

The anticipation of rising interest rates

REIT performance is affected by the trends in interest rates. The reasons are two-fold. First, a significant source of the return in REITs is via the dividend yield. As coupon rates for bonds rise, investors can get higher income from their safer assets. This creates a negative effect for REITs as investors transition to safer assets to generate their needed income. Second, many REITs have long term contracts with their tenants and cannot pass through increasing debt costs, and as a result, are less profitable overall.

What has been surprising, is that while short term rates have risen, there has been a year to date decline in long term interest rates. The 10-year treasury has gone from 2.45% at the beginning of the year to 2.25% currently. Therefore, we have not seen the headwind of rising long term rates that would cause a drop in REIT performance. The market, however, tends to value securities based on what we expect to happen in the future. The consensus, while wrong thus far, still expects rates to rise in 2017 and into 2018. That anticipation of rising rates will likely act as a headwind for REIT valuations.

REITs are primarily invested in real estate properties. To grow, they must fill the space they have, increase prices on their existing clients, and / or increase the amount of rented square footage. This requires an increased demand for square footage amongst tenants, and while that has been the case for industries like residential and industrial, other industries like retail have had more concerning trends on square footage. We have seen several store closures among large end and mall-based retailers over the last year as the percentage of shopping done online continues to increase. This has led to disruption among the retail based REITs as pricing and overall growth are called into question. As seen below, retail and mall focused REITs have performed very poorly during this period, and this has had a large effect on the REIT space overall as retail remains the largest percentage holdings of most common REIT indices. 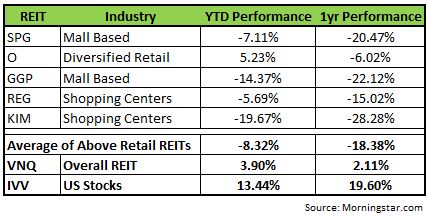 Our position is that, despite the recent underperformance, REITs should still have a place in client portfolios. The reasons are:

As with any asset class, there will be times where it is “in favor” or “out of favor”. Predicting when or how long an asset class will be in or out of favor is very difficult, and is precisely why we diversify.