What’s Going on in Turkey?

The Turkish economy has been strong the past decade so one would inherently believe this is a positive for the country. But recently a combination of issues are pointing towards a potential economic crisis in the country. The economic growth in Turkey has been fueled by too much debt, which is causing:

The overheated economy in Turkey has also resulted in a currency crash. The Turkish lira has collapsed versus the US dollar as investors are concerned about Turkey’s debt obligations (both government and corporate) to other countries. As the lira collapses, foreign debt becomes increasingly difficult to service and manage. See the chart below illustrating the weakness in the lira: 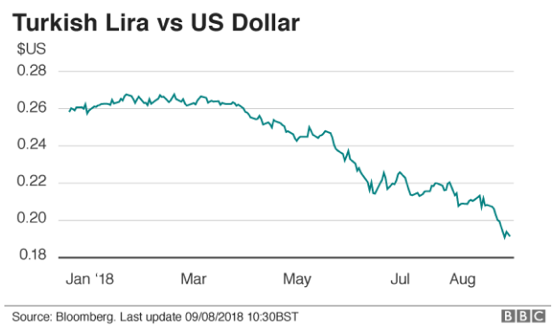 Also, relations between the US and Turkey are at a low point. Turkey has detained a US pastor accused of supporting a 2016 failed coup in against Turkish President Erdogan. In reaction, President Trump recently announced increasing sanctions and a doubling of tariffs on Turkish steel and aluminum.  This has added to the panic around Turkey, and the world watches and worries about contagion to other regions of the world, particularly The European financial markets.

But let’s put some perspective on Turkey’s economic crisis. On a macro scale, Turkish debt levels are smaller than what Greece was during their crisis several years ago. Outside of a handful of banks, there is not a lot of Turkish bond exposure in the global financial markets. Further, Turkey’s GDP is roughly only 6% of the Eurozone. Yes the Turkish stock market has fallen a lot, but it has become extremely cheap now possibly enticing investors. What global markets are really looking for is an internal Turkish economic plan to battle rising interest rates and inflation.

As of now, the crisis in Turkey is hurting emerging markets around the world, mostly due to US dollar strength versus global currencies. The GTR (EELV only has a 1% exposure to Turkey), G40i (no Turkish holdings), and Endowment (D and E) have international stock market exposure and have been negatively affected as a result. The crisis in Turkey could last awhile longer, but we feel the financial damage to international currency and stock markets has already occurred.

The MSCI EM Index is currently trading at 11.3 times forward earnings. This is a 26% discount to developed markets.  Based on price-to-book EM stocks look even cheaper. Following a nice 2017, returns in EM are weak in 2018 and we think hold value. There are still political and currency risks in emerging market investing, but for those with longer time horizons the risk/reward ratio looks favorable.