The stock market has been correcting the past week as investors fear the economic ripple effects of escalating tariffs between the US and China. What started back in March of 2018 as tariffs on imports of Chinese steel and aluminum has escalated to tariffs on hundreds of billions of dollars on thousands of products by both the US and China. Investors were led to believe that trade discussions were constructive until last week when the US announced that trade discussions had hit an impasse. In response:

Tariffs are essentially taxes designed to increase the price of imported goods. The purpose is to make domestic goods cheaper and imported goods more expensive. It’s a form of industry protectionism implemented by the tariffing country. The problem is:

It’s because of the potential for lower global growth that investors become concerned when trade tensions escalate. But before we panic, let’s examine a few facts. According to First Trust’s Chief Economist:

Obviously China has more at stake here than the US does in a trade war between the two countries. The US is also concerned about increasing trade deficits with China and the fact that China is widely believed to be involved in theft of US intellectual property. President Trump hopes these tariffs will force China to craft a long term trade agreement with the US that is fair to both.

The escalation of the trade tariffs and a strong US market in 2019 has caused investors to hit the pause button and take some profits. For now it looks like we won’t get much trade resolution until China President Xi Jinping and Donald Trump meet at the G-20 Summit next month. Below is an illustration of the trade tariff timeline between the US and China: 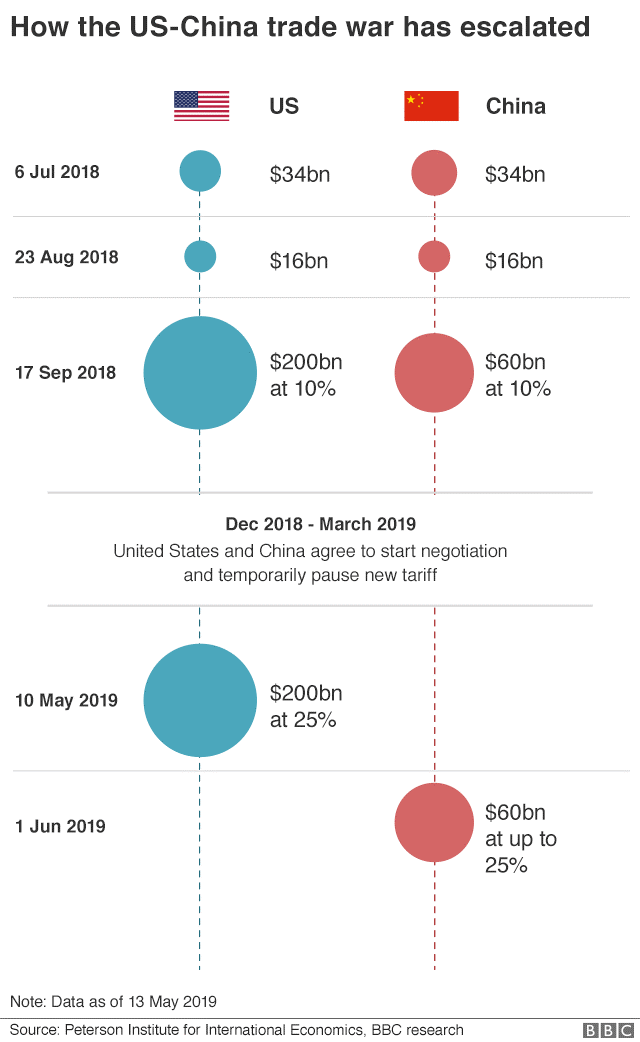 For the time being the markets could be more volatile than usual. In these turbulent times a good example of an ETF that can protect investors from volatility is Invesco’s S&P 500 Low Volatility ETF. The Gradient Tactical Rotation (GTR) strategy rotated to this sub sector in November of 2018 and has been invested there since. This has proven to be an opportunistic rotation as the US low volatility sub sector of the global market has performed well in the last 6 months.