On Wednesday, Federal Reserve officials held interest rates steady.  In the past, a steady rate has generally been regarded as “business as usual”, but the shifting discussion in the direction of future interest rates has created a changing dynamic in the markets.

First, a bit of brief history. In December 2018, the Federal Reserve raised interest rates and indicated there could be further tightening and more rate increases to come in 2019.  With a market already somewhat reeling from trade conflicts and a potentially slowing economy, the market took this news negatively and the markets declined nearly 20%.

Since that time, there has been a softening stance by the Federal Reserve, both in action and commentary.  We have had no interest rate increases since that December meeting, and with the discussions of this most recent meeting, the markets are considering a near certainty of rate cuts in the coming months.  The below chart from the CME group displays the probability of the level of interest rates after the next Fed meeting on July 31, 2019.  One month ago, there was a near 80% probability that rates were going to be left unchanged.  After the meeting yesterday, however, there is now 100% probability of at least a 25-basis point rate cut in the July meeting.

This shift of market perception and commentary from the Fed has had the following effects:

Lastly, while current yields for US treasuries are low by historical standards, they remain relatively high compared to the rest of the world.  The below chart reflects global bond yields, as of June 18, 2019, for several countries across the globe.  The data reflects that yields are negative for as far out as 30 years in Switzerland, and several other countries have negative bond yields out to 10 years. 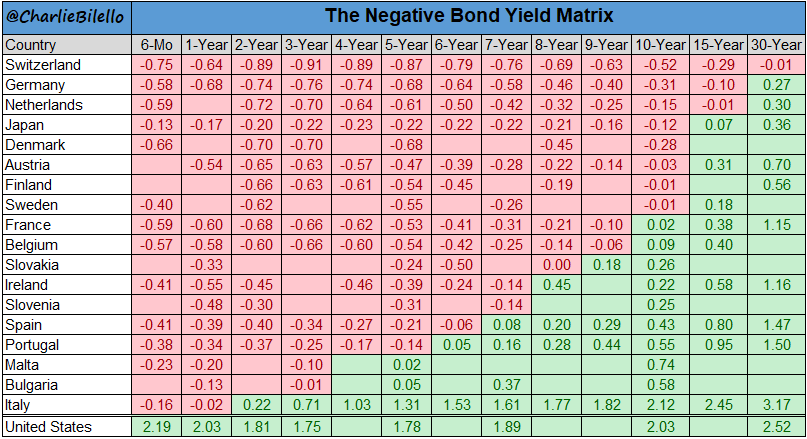